From Studio Kousagi Wiki
Revision as of 15:41, 27 March 2014 by Bunnie (talk | contribs) (Created page with "Novena is the codename for an open computing platform. It is a work in progress, but nearing a point where we think it could be viable for public release. Real-time updates and ...")
(diff) ← Older revision | Latest revision (diff) | Newer revision → (diff)
Jump to: navigation, search

Novena is the codename for an open computing platform. It is a work in progress, but nearing a point where we think it could be viable for public release.

Real-time updates and announcements can be tracked by following @novenakosagi on twitter. 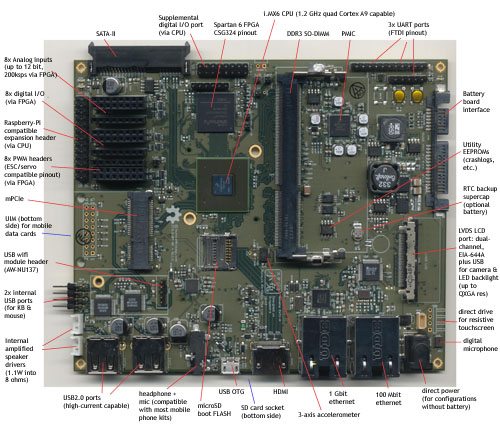 Above is an annotated diagram of the circuit board. The dimensions of the board are approximately 121mm x 150mm — sized to fit comfortably underneath a standard-sized laptop keyboard. The image above is rotated versus the installation orientation; the port farm is meant to be on the right hand side of the laptop, not on the bottom. The overall height of the board is just under 14mm, with the height being set by the thickness of an Ethernet connector. The thickness on my Lenovo T520 base portion is just under 24mm, so once we stack a keyboard and plastics on this it’ll be just about the same. 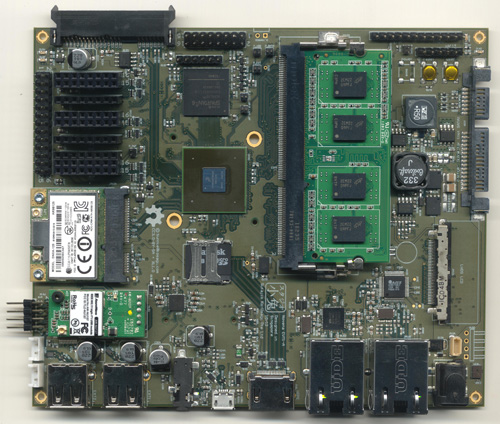 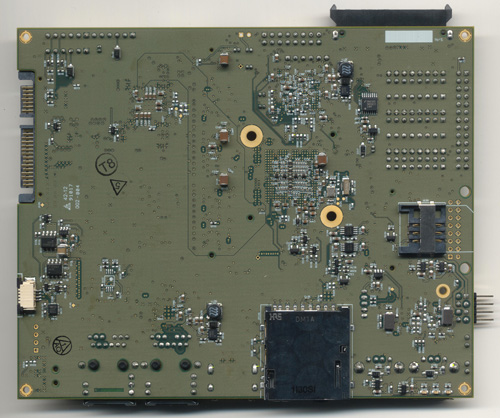 Items marked with an asterisk (*) require a closed-source firmware blob, but the system is functional and bootable without the blob.

Keep an eye on bunnie's blog for updates and notes. You can also discuss at the forum.

In order to give maximum power management flexibility, the battery interface functions are implemented on a daughtercard. I co-opt a cheap and common SATA-style connector to route power and control signals between the mainboard and the daughtercard. To prevent users from accidentally plugging a hard drive into the battery port, I inverted the gender on the mainboard of the battery-use SATA connector from the actual SATA-II connector. The current battery card is meant to work with the battery packs used by most RC enthusiasts — LiPo packs ranging from 2S1P to 4S1P (2-cell to 4-cell). RC packs are great because they are designed for super-fast charging. They are also cheap and easy to buy. For the board-side battery plug I decided to use the Molex connector found on classic disk drives, since they are cheap, common, and easy to assemble with simple tools. I couldn’t use a standard RC connector because the vast majority of them are designed for in-line use, and the few that have board mounts are too thick or too weird for use in this application.

The battery board can charge batteries at rates in excess of 4A. This means charging a 3-cell, 45Wh (4Ah) pack in about one hour. I’m estimating that a typical power consumption for a reasonable system configuration might be around 5-6W, so that’s 7-8 hours of runtime with a 1-hour charge time using that type of battery pack. Of course, since the whole laptop is user-configurable, typical power consumption is really hard to estimate — you could drop in a monster LCD and a power-hungry magnetic hard drive with loads of peripherals and the power consumption could be much higher. Of course, you can drop in a 100Wh battery pack if you wanted as well :)

Another cute feature of the battery board is that it can drive an analog panel meter. Xobs had suggested that it would be neat to embed a retro analog needle meter into the palmrest of the laptop to give a real-time display of power consumption. I thought it was a great idea, so I designed that in. Of course, the analog meter is driven by a DAC on the battery microcontroller, so it can be configured to perform a multitude of useful (or not so useful) read-outs, such as remaining runtime, battery voltage, temperature, the time (represented as an analog value), etc.

Forthcoming. Keep an eye on Xobs' blog for the latest progress.

Once you get Novena running, there are a few tweaks that you might have to make to the software to get it to run. Not all software likes running on Linux on anything other than x86/x64. Others just require software fixes to work around kernel bugs that we haven't fixed yet.

Enigmail (and possibly some other Thudnerbird extensions) explicitly only works for x86 and x64, Linux, Windows, and Darwin. You need to modify install.rdf. If you're using Debian, it's called Icedove.

PulseAudio uses a type of scheduling that requires very accurate DMA response. Unfortunately, this is not accurate with the current i.MX6 DMA driver. The workaround is to use time-based scheduling instead.

See booting novena for details on running the board after building and flashing the novena firmware.

EVT-stage design files. As always, provided as-is, no warranty for fitness -- but particularly worthy of re-iteration since as an EVT design, it is in early stages and I fully expect to be finding and fixing bugs.

EVT-stage design files. As always, provided as-is, no warranty for fitness -- but particularly worthy of re-iteration, since as an EVT design it is in early stages and I fully expect to be finding and fixing bugs.

Novena uses the stock Linux kernel with few patches. Any patches that might be useful to other projects (such as PCIe or ES8328 audio codec) are being submitted upstream.

The 2D/3D/Vector unit requires its own driver, which is available in source form on Github. Different userspace drivers require different kernel modules, so be sure to check out the branch that corresponds with your driver version.

Here on the wiki: