Difference between revisions of "NeTV widgets"

The widgets on the NeTV are based HTML/JavaScript. Widgets are all working under events mode right now. Briefly speaking, what your widgets doing are: Fetch content from different website (e.g. faceboo, twitter), exact related parts for title, body, and picture, and send to the NeTV bridge though TickerEvent API of NeTV web services .

All the widgets are located under:

There is a file called channelinfo.xml are the configurations of the widgets, which indicating which widgets will be loaded by NeTV, and the parameters of the widgets.

A sample a widgets configuration could be as follows. The name tag indicates what name will be showed in the widget list of the channel, the href is the related path of the the html file. And the parameters tag is some parameters you could set as variables of the widgets. In this example, we make this widget send 2 messages to the bridge every time.

Send Messages to the Bridge

The API used to send message is Ticker Event API. In order to use this API, we just need to format the content into title, body, image, and the NeTV will take in charge the display part. An example API call using JavaScript is showed below:

In the example, vBridgePath is the url of the bridge of NeTV:

Users are allow to adjust some parameters of each widget, e.g. how many messages can be sent to the bridge each time, or the zip code of an area. 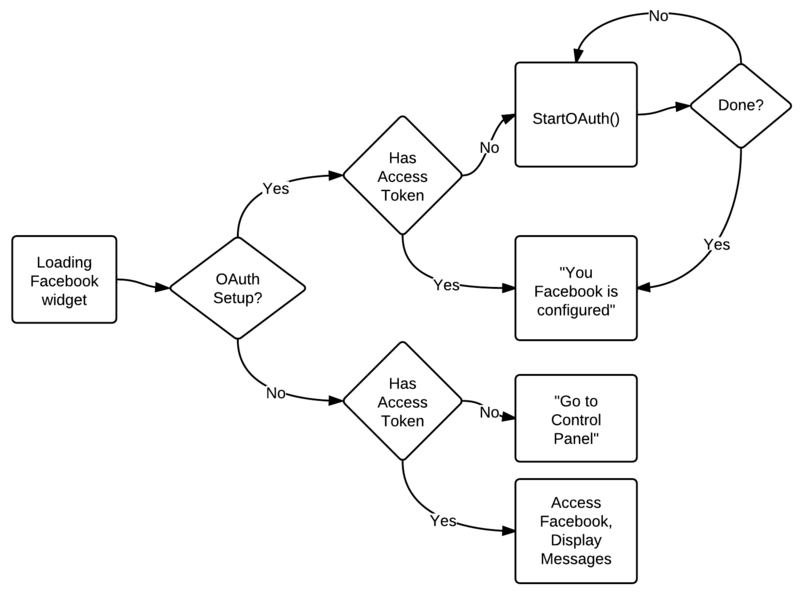 The goal for the OAuth setup is to obtain the access token from facebook. Due to the inconvenient input on TV, we use the Authenticating Devices method of Facebook. Use will get a short string on TV, and go to http://www.facebook.com/device to input the string. Then the NeTV will receive a access_token from facebook.

The weather widget fetches the weather content from the chumby server, displays the weather information of the next 7 days, with the corresponding weather image.

The GroupOn widget displays the on-going groupon deals of a certain city. The widget use the GroupOn API v1 to fetch the deal feeds.

This two widgets are both part of the sports widgets. The widget use the xml data from xmlteam:

Shows the news on People.com

Shows the news on Today's News of New York Times

Shows the news on engadget.com

Shows the news on espn.go.com